The Origin of Morganti Ju-Jitsu

At the end of the feudal period many farmers from Japan were left unemployed. In the beginning of the last century, the japanese government decided to encourage Immigration. Brazil was one of the main destinations. In 1908, the first Japanese arrived in Sao Paulo. In the following years, other ships came to Brazil bringing more immigrants and some of the finest martial arts masters in asian culture.
Masters also came: Ono, Wada, Koma, Isobe, etc

Paulo Morganti became a student of the Ono brothers, who were Judo masters from Japan. Paulo would stay after every class to learn about the old Japanese Jujitsu techniques. He also trained with the “Gigantes do Ringue”, Brazilian pro-wrestlers.

Paulo Morganti would grow up to share his passion for martial arts, onto his only son, Ricardo Morganti. Since he was very young, Ricardo started to train Martial Arts in the living room of their house with his father. Paulo encouraged Ricardo to experiment in techniques and moves that would work for fighting. They were always training and trying to figure out how to execute faster moves and more efficient leverage against an opponent. When Ricardo was 6 years old, Paulo took him to train at the academy with Judo master, Inato Wada. At 8 years old, Ricardo already knew all the throwing and ground techniques from the white to black belt.

Morganti Ju-jitsu can be considered a complete Martial Arts, because it has ground fighting, throwing techniques, and stand up fighting (punches, kicks, elbows, knees and defenses) in its roots.

WHAT IS MORGANTI JU-JITSU?

Ju-jitsu and jiu-jitsu have the same meaning, being that their writing in “kanji” (a Japanese typeface) is identical in both cases. The following “kanji” mean JU: soft, flexible or free and JITSU: art or technique, respectively, therefore ju-jitsu means “soft art” or Flexible Technique.

In the mid-1990s Morganti Ju-Jitsu was born, the first style of Ju-Jitsu in Brazil , idealized by Shidoshi Ricardo Morganti , he met the style through his father Paulo Morganti who was a student of the famous brothers Ono, responsible for bringing Judo and Ju-Jitsu for Brazil.

RESULT OF A COURSE COMPLETION WORK

First the idea of ​​the style was the result of a work of conclusion of course of Physical Education of Shidoshi Ricardo Morganti in the UNIFMU faculty , whose name was Morganti Ju-Jitsu. It was only in 1998 that the style was introduced to Master Wally Jay founder of ISJA (International Sport Ju-Jitsu Association) who went on to recognize the MJJ as a member of the entity and the recognition of Morganti Ju Jitsu as Style.

Since 2000, due to the enormous amount of medals and the work done by Shidoshi, he then presides over ISJA until 2006, leaving a legacy within the entity in which he still remains director in Brazil. With the spread of the MJJ throughout Brazil, many black bands began to develop the MJJ around the world, disseminating the art to other countries, whose objectives are:

Maintain and preserve Morganti Ju-Jitsu centralized in a single federation;
Preserving, disseminating and forming black bands through bibliographic research and the formation of their intellectual knowledge, as well as preserving their intellectual property;
Promote competitions at national, regional and World level;
Ensure that its members receive training in accordance with the curriculum, as well as an evaluation system;
Empower the black bands around the world to referee championships of all levels;
Promote together with society martial precepts of non-violence, hierarchy and altruism;

Following these concepts and with the enormous growth, the WMJJF ( World Morganti Ju-Jitsu Federation ) was born in 2008, which brings together all the practitioners, academies and members of the MJJ around the world. 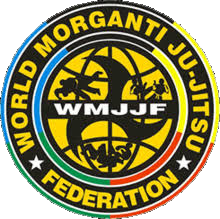 The sequence of tracks follow in the following order:

The morganti Method consists of Kihon  which is the practice of fundamental techniques like: bases, defenses, punches and kicks. Nague-Waza: techniques of projection to the ground, that is, unbalanced. Ne-Waza : martial arts techniques that are performed on the ground and kata . The student who wishes to graduate must present the minimum required conditions and technical notions.

Kata is a form of imaginary fight against one or more opponents. In the style Morganti Ju-Jitsu 7 katas are used, being:

ELEMENTS OF THE NATURE OF KATA

The Elements of Nature fill our planet with the Golden Age of energy and balance. They are the active elements, according to the Chinese medical literature they are: Fire, Earth, Water, Metal, Wood and the energies that balance these elements (Ying and Yang), all this in balance form the forces of our planet. Each element has its opposite and each one has a function and they complete the Katas of the tracks of the Morganti Ju Jitsu.

MORGANTI JU-JITSU IS A WAY TO LIVE

A method of struggle and a form of physical activity that brings together mind – body – spirit. It gives the practitioner a stimulating form of knowledge, optimizing calm, patience and balance. Through this form of learning, he proposes non-violence, since the aim of Morganti Ju-Jitsu is to show the practitioner that it is necessary to follow a philosophy of internal growth, that is, the path of self-knowledge.

The History of Morganti Ju-Jitsu

The Meaning of Oss